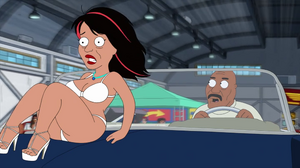 Diselle is a model that LeVar Brown has always dreamed of having pose over his low rider and hopes to win at a convention to have her on his car. When Cleveland is injured during a hydraulics competition in "Crazy Train", he rushes him to the hospital, knocking Diselle onto his car until he shakes her off so he can proceed. She tries to shake it off by posing with a second car, but collapses, allowing a passer-by to pinch her butt.

Retrieved from "https://cleveland.fandom.com/wiki/Diselle?oldid=28483"
Community content is available under CC-BY-SA unless otherwise noted.