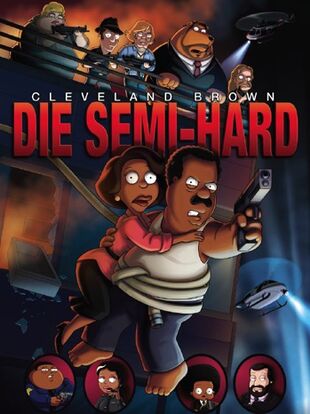 Die Semi-Hard
Cleveland tells his family his version of the greatest holiday-themed blockbuster movie ever told. 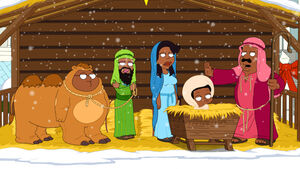 To help pass time while posing in a holiday nativity scene, Cleveland tells his family his own version of one of his favorite holiday stories, “Die Hard”.

After detective Cleveland Brown flies into Los Angeles to meet his wife at her job at Waterman International, he tells his limo driver Rallo about some of his marriage troubles while he hopes to reconcile during the office Christmas party. Meeting with his wife, he takes off his shoes and tries to be romantic but Donna resists his charms and returns to the party alone.

Meanwhile, a group of thieves led by Tim posing as terrorists take the party guests hostage and separate Mr. Waterman in order to gain access to the Waterman International vault.

Cleveland tosses his shoes out the window over a nearby poser line when he hears gunshots and arrives as Mr. Waterman is killed. Hearing noise from Cleveland, Tim sends Kendra out to investigate where she is killed by Cleveland. As the terrorists discover Kendra's body, they hear Cleveland trying to use his radio to call for police and start shooting. Police dispatcher Roberta sends officer Cleveland Brown, Jr. to investigate. As Cleveland dispatches another of the terrorists and escapes into an air shaft, Jr. arrives but is told by a guy that looks like Huey Lewis but is really one of the terrorists that all is well and starts to leave. To get his attention, Cleveland throws a janitor out the window onto Jr. squad car. Jr. frantically backs away as the terrorists fire on his car. 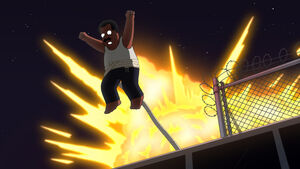 As police surround the building, Cleveland taunts the terrorists but slips and gives away his location. As Robert Tubbs struggle to crack the vault, the gift exchange at the party hostages goes on. But when Donny's gift turns out to be a small package of golf balls in a large box he is shot too. As Cleveland and Jr. exchange banter over the radio, Tim arrives but is taken by surprise. Tim manages to come up with a name on the office list and fools Cleveland who gives him a gun which her turns of Cleveland. Cleveland manages to distract him momentarily and takes out another of the henchmen as he escapes. As Cleveland hides behind a wall of glass and keeps Tim and Lester pinned down, Tim orders Lester to shoot out the glass after noticing Cleveland’s bare feet. Cleveland is forced to retreat through the glass picking up several shards in the process. Despite picking out much of the glass, Cleveland leaves bloody footprints behind him. 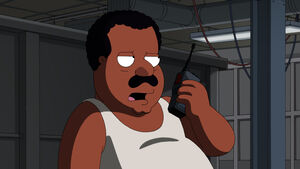 Two FBI agents arrive and order the building power to be cut off which results in the vault opening. The terrorists take Cleveland’s friend Holt hostage but kill him after they learn that they also hold Cleveland’s wife Donna. As Cleveland ponders his next move, Lester manages to sneak up on him but is hung from a chain by Cleveland after telling him that the hostages have been moved to the roof with explosives. Arriving on the roof, Cleveland orders everyone off but the FBI agents in a helicopter mistake Cleveland for one of the terrorists and open fire on him. Tim orders the roof blow as Cleveland ties a fire hose around his waist and jumps from the rooftop. The blast engulfs the helicopter as Cleveland shoots his way back into the building. As Cleveland catches Tim and his last henchman, Tim grams Donna and holds her at gunpoint forcing Cleveland to drop his gun. As Tim thinks he's won, Cleveland draws a second gun taped to his back and shoots Tim and the henchman, forcing Tim through the window. Tim grabs Donna's wig and holds her by the hair. Cleveland makes Donna undo her wig as Tim falls to his death.

Outside as the surviving hostages are freed, Donna and Cleveland reconcile. Lester springs up shooting at the two to be killed by Jr. who also shoots Walt noting that he shoots kids.

The scene returns to the nativity scene as only Jr. and Roberta remain awake. Jr. enthusiastically asks about a sequel to be told they will see what the internet has to say first.