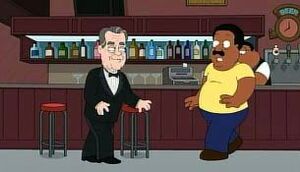 Richard Wagstaff "Dick" Clark (November 30, 1929 - April 18, 2012) was an American businessman, game-show host and radio and television personality. He served as chairman and chief executive officer of Dick Clark Productions, which he has sold part of in recent years.

Dick Clark appears as the bouncer at The Broken Stool in "The Curious Case of Jr. Working at the Stool" when Cleveland Jr. asks Cleveland and his friends to leave because they are occupying a table that can be used by paying customers. His stroke-impaired motor skills are enough to frighten the group away.

Retrieved from "https://cleveland.fandom.com/wiki/Dick_Clark?oldid=21859"
Community content is available under CC-BY-SA unless otherwise noted.