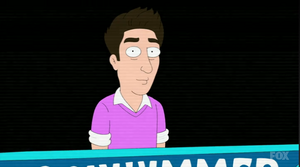 David Lawrence Schwimmer (born November 2, 1966) is an American actor and director of television and film. He is best known for role as Ross Geller in the television show Friends and Melman the Giraffe in the movie Madagascar.

Retrieved from "https://cleveland.fandom.com/wiki/David_Schwimmer?oldid=31861"
Community content is available under CC-BY-SA unless otherwise noted.