Dancing with the Stools 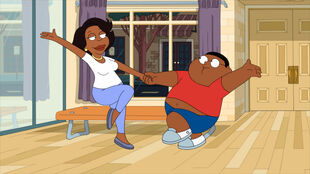 Dancing with the Stools
Cleveland Jr. professes his love for Donna.


Plot: Determined to claim the first place trophy at the annual "Dancing with the Stools" ballroom dance competition and tired of always losing to Freight Train and Cookie, Donna forces Cleveland to be her partner in the annual dance contest. But when Cleveland turns out to have two left feet and Jr. stuns Donna with his moves, she recruits Jr. to be her partner. Cleveland takes the rejection hard and pledges to win without the two. Cleveland goes to Little Moscow to find a partner and finds Svetlana. 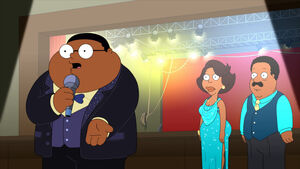 While working out with her, Svetlana puts the moves on Cleveland while Jr. puts some moves of his own on Donna, confessing his love for her. Shocked, Donna calls a time out and goes to Cleveland to tell him, asking him to intervene and asks Cleveland to be her partner again. When Cleveland confronts Jr., he insists he's taken over as the man in Donna's life and Cleveland nearly falls for it but stops in time and thinks he manages to talk some sense into Jr..

At the dance contest, Jr. appears just before the dance contest and proposes to Donna. Taken aback, Donna rejects him pointing out that she loves him only as a mother. Jr. finally understands and agrees to be just her dance partner. 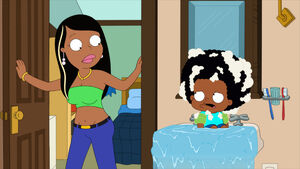 Meanwhile, when Rallo needs a babysitter, Roberta volunteers in order to have more time with Federline. But Rallo turns out to be a block to their making out. In addition, performing Donna's job also has the effect of making Roberta gain weight. Thanks to Rallo's gum in her hair, Federline finds her appearance has changed to become a dead-ringer for Donna and bolts.

Returning from the dance contest, Cleveland reveals they placed fourth and they find Roberta chasing a nude Rallo while still looking like Donna. Donna tells her she can go back to Federline but Roberta says there is no way she wants to take the chance of having a child like Rallo. Donna points out that she said the same thing too until men started growing mustaches. As Roberta pauses at this, Jr. looks her over and comments that he thinks she looks really good which makes Roberta pause again.

Previous Episode /// Dancing with the Stools \\\ Next Episode