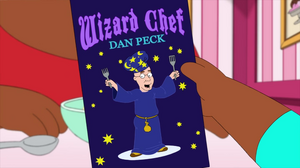 Dan "The Wizard Chef" Peck is the proprietor of a restaurant specializing in boiled, old stringy rabbit meat in "Of Lice and Men".

Cleveland Brown Jr. surprises Rallo with the last pair of reservations to the restaurant's opening, but Rallo would prefer to be with his own friends who shun him after he has his head shaved due to lice. Rallo is unaware that Junior has continued to shave his head so he can have a playmate, but seeing Rallo's unhappiness, he stops shaving him and Rallo is able to join his friends.

Retrieved from "https://cleveland.fandom.com/wiki/Dan_Peck?oldid=28223"
Community content is available under CC-BY-SA unless otherwise noted.