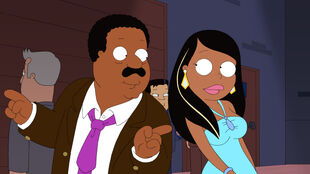 Cleveland tries to make inroads with his new stepdaughter Roberta by asking her to accompany him to the school’s Father-Daughter Dance. Last year Robert didn't show up. The evening seems to be going smoothly until Cleveland runs over the family pet on his way to get an ice-cream cake for celebration. Then his redneck neighbor Lester takes it and eats it. This kills his chances of being accepted by his new kids. Rallo and Cleveland look for Meadowlark Lemon and Cleveland dives in nasty places looking to keep the secret but Lester and the others tell him to be honest. 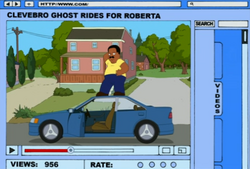 Then he makes amends by getting a new dog named Kareem Abdul Jabbark, but he gets killed when Lester shoots him while he's obeying Cleveland's command to "fetch." Cleveland then dances with Roberta, making a happy ending.

Meanwhile, Cleveland Jr. tries to make friends at his new school. Instead, he gets beaten up by a girl and tripped by others. When he runs to the bathroom, he finds out that the school has no doors! A guy named Laine is there; impressed by what a good door Cleveland Jr. makes, he befriends him. Cleveland Jr. goes on to make friends and money, but when his dad comes to the Father-Daughter Dance and sees his son working there, he becomes furious and tells him that he is not working in a restroom.

Retrieved from "https://cleveland.fandom.com/wiki/Da_Doggone_Daddy-Daughter_Dinner_Dance?oldid=30662"
Community content is available under CC-BY-SA unless otherwise noted.