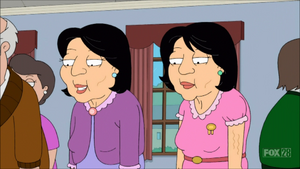 Cree Summer Francks (born July 7, 1969), best known as Cree Summer, is an Afro-Canadian Aboriginal and German-Canadian actress, musician and voice actress. She is perhaps best known for her role as college student Winifred "Freddie" Brooks on the NBC sitcom A Different World. As a voice actress Summer is best known for voicing Penny in Inspector Gadget during Season 1, Elmyra Duff in Tiny Toon Adventures, Susie Carmichael on Rugrats and All Grown Up, Princess Kida in Atlantis: The Lost Empire, Valerie Gray in Danny Phantom, Foxxy Love in Drawn Together, Numbuh 5 in Codename: Kids Next Door, and Cleo the Poodle in Clifford the Big Red Dog.

Cree provides the voices for the twin in purple at the Stoolbend Rest Home and Guest #1 in "Sex and the Biddy".

Retrieved from "https://cleveland.fandom.com/wiki/Cree_Summer?oldid=30517"
Community content is available under CC-BY-SA unless otherwise noted.