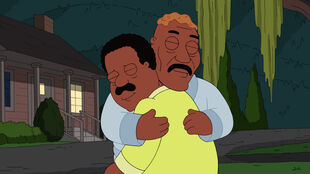 Cleveland worries that the Freight Train is coming off the tracks 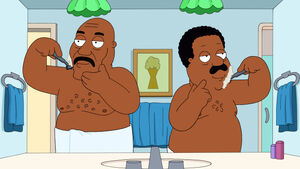 Cleveland stops by his dad's house to find him working on his low rider. While helping out, he manages to pick the right tool and receives a thanks from his dad. The family is less than impressed until he also gets an invitation to go to the junkyard as well. Cleveland is further pleased when Freight Train invites him to the low rider show, leaving Donna suspicious and further behavior does nothing to dissuade her. When Cookie calls at night, they find Freight Train in a tree wearing peanut butter on his head and acting crazy, believing people are after him. Cleveland convinces him that he took care of the bad people and Freight Train tells him that he loves him.

Following an examination, Dr. Fist believes that he has dementia from his medicines and says he has be off of his meds and recommends an asylum. Cleveland nixs this as he doesn't want to lose time with his dad while he is being kind. They bond as Freight Train acts stranger every day. On the day of the low rider show, Freight Train returns to normal, insulting Cleveland and intending to leave him behind. At the show, Cleveland shows up in his own car with a rough job of trying to pass it off as a low rider. Freight Train is annoyed that he is there and tells him he sucks. As Cleveland stays to enter the hydraulics competition, he does well until the car starts hopping on him, leaving him injured. Freight Train stays by Cleveland's side and rushes him to the hospital. As Cleveland recovers, Freight Train pretends that he didn't save him, showing off a homemade award without fooling Cleveland. 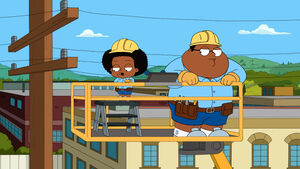 Meanwhile, Junior and Rallo observe construction near the park and see a worker throwing stuff at a broken cherry picker. Rallo manages to get it running and they take it out for a spin. They rescue a little girl's cat from a tree and Junior decides to keep using it to help people. They become legends until construction company comes looking for the lift. They take off with it, pretending to be construction workers until they are followed by the crew. As they start to run out of gas, Junior stops the cherry picker by the playground and tells the kids that the workers want to destroy the lift and the kids form a defensive perimeter. After crunching the numbers on running over the kids, the construction company decides to leave them with the cherry picker.