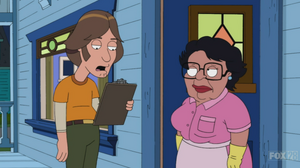 Consuela is a recurring character on Family Guy. She is of Hispanic origin and speaks very broken English. For example, she pronounces the word "mister" as "misser" and uses incorrect sentence structure. She refers to everyone as "Misser" someone or other, regardless of their gender. According to Stewie, this may be because she does not know the meaning of the word, "mister". She is noteworthy for being one of the few characters to originate in a cutaway gag that became a "regular" character on the show, interacting with the other "normal" characters.

She is voiced by Mike Henry, who modeled her after one of his own former maids.

She appears in "Die Semi-Hard" as the Brown's housekeeper after Donna is taken hostage.

Consuela is feature in a mock commercial for NO perfume in "Wide World of Cleveland Show".

Retrieved from "https://cleveland.fandom.com/wiki/Consuela?oldid=31341"
Community content is available under CC-BY-SA unless otherwise noted.