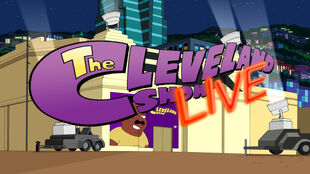 Cleveland Live!
When Cleveland and Donna attempt to celebrate their anniversary, their unruly kids and disruptive friends, including Donna’s ex-husband, Robert, get in their way. 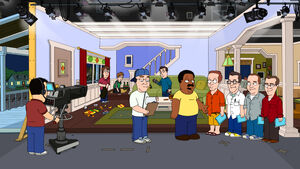 In an animation first, The Cleveland Show offers the audience a behind-the-scenes look at the “filming” of the episode. When Cleveland and Donna attempt to celebrate their anniversary, their unruly kids and disruptive friends, including Donna’s ex-husband, Robert, get in their way.

After the introduction, Cleveland tells the boys they are staying with Robert Tubbs so that Cleveland and Donna can celebrate their anniversary. Roberta announces she is going to a friend's house and an unseen stagehand yells that Cleveland is fat. 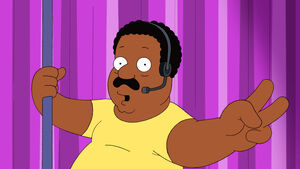 At Robert's house, they hear a knock on the door and Robert believes that people he's scammed come after him. Robert shows Cleveland his secret stash of guns and Cleveland shoots the stagehand, not realizing the gun has real ammunition. Cleveland arranges for Robert to stay at Tim and Arianna's where Robert seduces Arianna.

Back at the Brown's house, Cleveland and Donna try again for a night of romance where Roberta arrives and complains about being written out of the episode. Just then Tim arrives and tells of seeing Robert and Arianna. Roberta interrupts by walking across the stage with a bottle of alcohol and says she is starting the afterparty since her role was cut from the show. Cleveland nervously tries to get her off stage and she hit him in the throat, forcing him to call for commercial.

When they return, Cleveland has a stagehand in Roberta's clothes and wig read from a script that "she" is sorry for interrupting, gives an explanation for her actions and says she is going back to her friend's house.

Back to a disconsolate Tim, Cleveland and Donna decide to go to Arianna's, where they find her still glowing from the sex and dropping innuendos. They try to convince Arianna that Tim needs her and she describes how hard it would be after a night with Robert, and Arianna and Donna start comparing experiences.

Cleveland and Donna return home where they tell Tim he has to fight to keep Arianna. Robert bursts through the door, convinced that his pursuers are closing in. Arianna follow trying to persuade Robert to take her with him. The door bursts open and Julia Roberts bursts in portraying "Julia Robertson", Robert's parole officer. A drunken Roberta returns and despite the director and camera crew desperately trying to keep her out of frame, she gets to perform her monologue from the debate scene that was cut. When she slams the door on her way out, a light falls on Julia Roberts. As a medic crew rushes in to save Julia, the director announces that they are running out of time and Cleveland hastily rushes through a scenario of Tim and Arianna making up, Robert spending more time with the kids and Cleveland and Donna getting their romantic dinner, finishing just in time. The cast hurriedly says their goodbyes over Julia Robert's corpse, revealing characters that didn't appear in the episode and twins portraying Rallo.