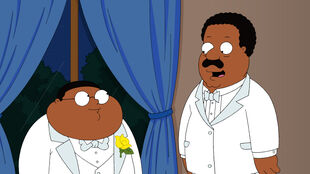 Cleveland gets a little too real


Plot: While watching a baseball game at Stoolbend Stadium, Cleveland sees Roberta kissing with Federline Jones. Cleveland tries to talk to Roberta about maintaining her virginity but while she admits she has yet to do anything, makes it clear that it is none of his business. Following the advice of his friends, he takes the family to church to hear about maintaining purity. Cleveland Jr. gets carried away in the moment and pledges his purity to Cleveland's dismay. 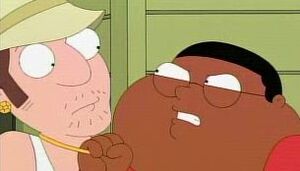 Cleveland takes Cleveland Jr. to a comic book convention to show him the horror of virginity for boys but they get carried away by the toys and fun. Next, Cleveland tries to enlist the aid of Federline Jones to teach Cleveland Jr. but the plan fails as well when Cleveland Jr. refuses to treat the girls poorly at the mall, instead telling them they should save themselves for marriage too.

Cleveland Jr. overhears Cleveland and his friends insulting him for keeping his vow of purity. He and his friend Ernie steal Lester's money for prostitutes and Kendra's mobility scooter and go to the Arnold's Whoreshack. Cleveland and Lester figure out the plot and try to stop them. Cleveland decides its alright for Jr. to remain a virgin and they go to the church purity ball where Cleveland Jr. is a hit with the girls as the only boy there.