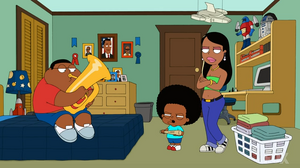 Cleveland Jr.'s Room is a room in Cleveland Brown's house in Stoolbend where Cleveland Jr. sleeps and spends his time. Its walls are a pale green while its ceiling is blue. It contains several posters and pictures, including a shrine to famous African Americans, such as Barack Obama, Martin Luther King Jr. and Kanye West. The room also contains models from various Science Fiction movies, including the R2-D2 with Cleveland's afro from Blue Harvest and Optimus Prime. A TV is in one corner of the room and a computer is in another. Junior's refrigerator Perry sits by the window and a gumball machine is located near the door.

In "The One About Friends", Ernie stayed with Cleveland Jr. in this room.