Cleveland Orenthal Brown, Jr. is a main character on The Cleveland Show and the biological son of Cleveland Brown and his ex-wife Loretta Brown. In his major change of appearance from Family Guy to The Cleveland Show, he went from a hyper child to an obese teenager with glasses and a slower voice.

Cleveland Jr. was a hyper child and a minor character who had a short time with Peter in the episode, "Fore Father", where he showed a talent of playing golf. After that episode, he made short appearances later in the show, with his last on Family Guy at his father's supposed funeral.

After the show, when Loretta gave custody of Cleveland Jr. back to Cleveland and forced him to move, the two left for California. On their way there, they decided to live in Stoolbend instead, where Cleveland married Donna Tubbs, and Rallo and Roberta became his step-siblings. Here, Cleveland Jr. was given his own room. When Rallo met Cleveland Jr., he would often call Cleveland Jr. and his father "fat." In the second episode, he served as a door in the bathroom so that he could earn his classmates' respect, which angered Cleveland. He also seems to have a fear of toasters because the toaster in his house scares and taunts him. His relationship with Donna is quite well despite her being his step-mother but he treats her as if she was his mother as he never seems to argue or treat her badly like Rallo does to Cleveland, and is quick to do whatever she wishes.

When it is revealed in "Birth of a Salesman" that he has repressed emotions from the divorce of his parents and has in fact never cried before, his new siblings help him to express his sadness and at the same time the three of them accepted one another as family. In a preview of the show, he says, "I can eat this and a salad," and Cleveland replies with, "A salad would be a good start," possibly meaning he's encouraging him to go on a diet. However, it could also simply be some sarcastic remark to Cleveland Jr.'s obesity.

Junior's obesity and low self esteem make it difficult for him to find friends. In "Da Doggone Daddy-Daughter Dinner Dance", he becomes friends with Laine and Kyle, although this is only because he serves as a good replacement door for the bathroom stalls of Stoolbend High School. In "The One About Friends", Cleveland Jr. creates an actual friendship with Lester Krinklesac's son, Ernie. He shared a kiss with Laura Davis at the Stoolbend Community Church's chastity ball.

While Cleveland Junior is not very active as he was in Family Guy, he has other hobbies; he enjoys doing chores and playing the tuba. Derek nominated him for student-council president as a joke, but, after saving Oliver Wilkerson's life, he won. Additionally, while he may not know much when it comes to social situations, he is quite academically talented; he apparently has the second highest calculus scores at his school. 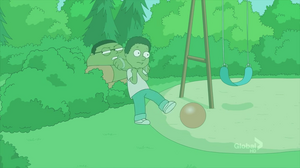 In "Back To Cool" he begins a new-found, father-like bonding with Robert Tubbs. Throughout the episode, they become more friends and Robert makes Jr. cooler, and they even almost have the sex talk, but this is stopped by Cleveland so he can do it himself.

"A Rodent Like This" reveals that Junior is actually a secret agent that killed the hyperactive Family Guy version and took his place, with a planned assassination of Tim. 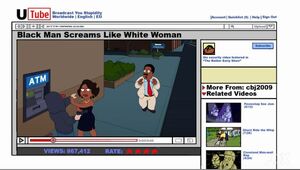