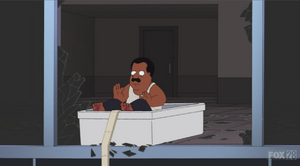 The Bathtub Gags are a series of running gags originating on Family Guy and infrequently continuing on The Cleveland Show, in which Cleveland's house is destroyed from the front and the platform keeping his bathtub steady tilts and he slides off. This happened seven times in the series and three times in The Cleveland Show.

Usually, at the object's first impact on the house, Cleveland would say "What the hell?!". As the bathtub slides out onto the yard, he'd scream in disbelief "No No No No No NO!"

Peter and His Rocket

In the pilot episode, Peter attempts to catch the Road Runner a la Wile E. Coyote with a rocket, but of course, it goes into Cleveland's house.

In "Gone with the Wind", Loretta Brown dies from falling victim to the gag. She died when Peter Griffin swung around a dinosaur skeleton and hit Cleveland's old house. Loretta is in the bathtub, she falls out and dies. Later in the episode it was mentioned that Cleveland fell out of the bathtub "more times than could possibly be funny" and was left without a scratch. In addition, Cleveland drops an Oreo at her tombstone and says, "No no no no no NO!!" the same way he would falling out of the bathtub.

In "Die Semi-Hard", Cleveland ties himself to a firehose, crashes into a window with a conveniently located bathtub, but instead of landing with the bathtub, Cleveland ropes onto the ledge of the building's window.

As Cleveland's life flashes before his eyes in "Das Shrimp Boot", he imagines himself dying. As he rots into a pile of dust, he shouts "No No No No No NO!" the same way he does in the perennial bathtub gag.

Retrieved from "https://cleveland.fandom.com/wiki/Cleveland%27s_Bathtub_Gag?oldid=32054"
Community content is available under CC-BY-SA unless otherwise noted.