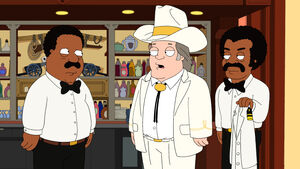 When Cleveland sees a commercial that a riverboat gambling casino is coming to Stoolbend, he is excited to go but Donna puts the brakes on his plans. To take the edge off gambling fever, Donna sets up a night of poker with Cleveland and the girls but the guys soon free Cleveland to go to the riverboat. Cleveland has a great night and is convinced to go to the club's VIP Player's room where he promptly loses. In an effort to save face, he rushes home and grabs Roberta's college fund that Donna had been saving. Going back to the casino, he starts to win again until his Asian table mate spills his drink in Cleveland's lap just as the last card is dealt bankrupting Cleveland. Desperate to earn back Roberta's college fund before Donna finds out, Cleveland takes a job on the riverboat as a bartender but is quickly demoted and given menial jobs. When the casino operator cheats him on his wages, Cleveland observes the same Asian man spill his drink on Holt as he loses and sees the dealer secretly draw a card from a hidden deck, causing him to lose his precious car. Cleveland returns home and confesses what he'd done. When he describes what he saw, Kendra recognizes the scam. 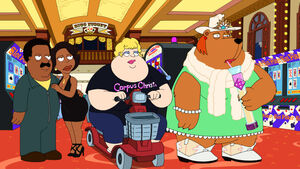 Deciding to hatch a Charlie's Angels plot scheme, Donna distracts the casino operator while Arianna takes out the Asian player, leaving Kendra to outplay the dealer to win. The casino operator recognizes Kendra from their past relationship but when Kendra starts to relate their story she is cut off by Cleveland. Having planned on using Arianna for muscle to cover their getaway, things go awry wen she falls over drunk. Holt arrives to rescue his car which he stole back and the gang make their escape in James-Bond fashion, with Holt's car; and Kendra's scooter; turning into submarines. When Cleveland proudly tells Roberta they recovered her college fund, she announces she has no intention of going to college and will go to Hollywood instead.

Retrieved from "https://cleveland.fandom.com/wiki/Cleveland%27s_Angels?oldid=31458"
Community content is available under CC-BY-SA unless otherwise noted.