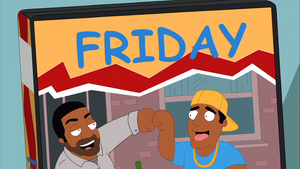 Christopher "Chris" Tucker (born August 31, 1971) is an American actor and comedian. He is best known for the Rush Hour film series. Tucker became a frequent stand up performer on Def Comedy Jam in the 1990s. He came to prominence in the 1995 film Friday alongside Ice Cube, and then appeared in The Fifth Element.

In "The Men in Me", Cleveland picks up a DVD copy of Friday starring Ice Cube and Chris Tucker at Blackbuster.

Retrieved from "https://cleveland.fandom.com/wiki/Chris_Tucker?oldid=29645"
Community content is available under CC-BY-SA unless otherwise noted.