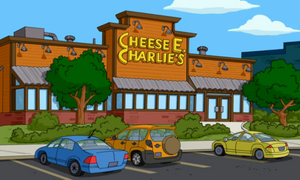 Cheese E. Charlie's is a popular chain of children's restaurant with at least one located in Stoolbend and another in Quahog. A man walks around in a large rat costume, most likely serving as the titular "Charlie". He is apparently taking a class in child psychology in college. This character also appears as an anamatronic along with other anthropomorphic animals on a stage serving as a "band". They have a large ball pit that Cleveland Jr. often gets stuck in and that Rallo enjoys using, along with other children's games such as skeeball and Whack-a-Mole. They employ Nick Nolte as a chef, who handmakes the "twisty napkins". Scottie Pippen also applied for a job here. Rallo took Trish Barty on a date here, where it was revealed that they serve Chardonnay and "chocolate pizza".

It is based on the restaurant in the Family Guy episode "Chitty Chitty Death Bang" called "Cheesie Charlie's" which was in turn inspired by the real restaurant "Chuck E. Cheese's".

Retrieved from "https://cleveland.fandom.com/wiki/Cheese_E._Charlie%27s?oldid=24089"
Community content is available under CC-BY-SA unless otherwise noted.