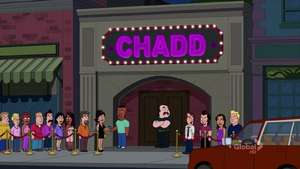 Chadd is the nightclub that Cleveland tries to spend the evening with Tori in to make Donna jealous in "Frapp Attack!" when Hollywood producer Willy Nilly attempts to take her away from Cleveland. Cleveland tries to shout at the bartender that he requested "Jack and Diane" three hours previously which was three hours past his bedtime. Trying to carry drinks back to Tori, he has them knocked from his hands by a dancer. Tori shouts that she and her boyfriend and some of his friends are going to an even darker, more crowded nightclub as Cleveland heads back to get more drinks.

Retrieved from "https://cleveland.fandom.com/wiki/Chadd?oldid=21451"
Community content is available under CC-BY-SA unless otherwise noted.