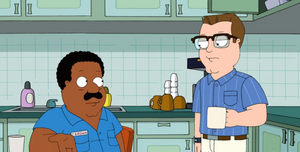 Chad was an employee at Waterman Cable until being fired by Tim in "Like a Boss". When a former supervisor dies, Mr. Waterman gives Tim a promotion and he quickly becomes a taskmaster. Chad discusses going on a shooting rampage in the office but suggests Cleveland and Terry Kimple wear red shirts so he'll know not to shoot at them. To try to snuff out the flames of revolt, Tim fires Chad while demanding everyone else go on a work retreat which takes place during the Superbowl weekend. Nervous that Cleveland will show him up, Tim insists on them being partners during a scavenger hunt. When Cleveland refuses to help out, Tim panics when he finds that neither of them have a map to get back. It turns out that Tim is actually afraid of the woods which is why he lives in the city. Cleveland and Tim confront each other over their issues. They find out that it was their wives who both put them up to becoming supervisor in an attempt at a power play and decide to work together to get out of the woods. Just then, Chad arrives to shoot Tim in revenge for being fired. Cleveland manages to get Tim airlifted to a hospital and recovers in time for the Superbowl party. The epilogue reveals that Chad was acquitted for shooting Tim because he had a hunting license.

Chad is voiced by Nick Puga.

Retrieved from "https://cleveland.fandom.com/wiki/Chad?oldid=32513"
Community content is available under CC-BY-SA unless otherwise noted.