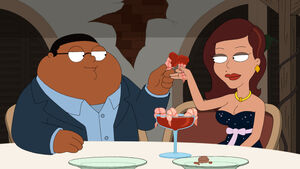 Cecilia Brown (née Moreno) is the niece of Choni and works at Choni's Cantina Mexican restaurant.

When Cleveland Brown tries to set his son Cleveland Brown Jr. up with Flora, a chubby server at Choni's Cantina in "Y Tu Junior Tambien", he instead makes a connection with her cousin Cecilia. Choni invites the family over to the restaurant for dinner and offers to throw the happy couple a big party but no one can believe that Junior could connect with someone as good looking as Cecilia who has the potential to top Donna for beauty. But when Lester calls immigration as a supposed favor for Cleveland when he suspects Cecilia's motives, Junior tries to protect Cecilia by running off with her and getting married. Junior moves out of his family's house to live with Cecilia but she realizes he is just a kid and later admits they are both too young to be married. Cleveland pushes things by calling their marriage a sham and Choni intercedes, not happy that Cleveland isn't buying into Cecilia honestly being in love with Junior. Cecilia shows them a picture that proves Junior is the spitting image of her father. Junior offers to remain married to prevent her deportation and Cecilia continues to work for her aunt while they live apart.

In "There Goes El Neighborhood", Cleveland Jr. helps enroll Cecilia into school. To help her become acclimated, he tries to set her up with a date with Tyler Hudson. But when he sees they become too friendly, he intervenes and threatens Tyler. When he finds Cecilia depressed since Tyler didn't show up for their date, he forces Tyler to go out with her but threatens him again if he becomes too friendly.

Cecilia and her aunts Choni and Sofia Vergara offer support of Cleveland Jr. having a quinceanera in "Wide World of Cleveland Show".

Cecilla appears at Perry's funeral and at the ceremony when Cleveland and Donna renew their wedding vows in "Here Comes the Bribe".

In "California Dreamin'". Gina puts together an elaborate production of stand-ins including Cecilia & Choni to convince the Brown family that Cleveland has returned home from Los Angeles and they should do the same.

Cecilia is voiced by Elia Saldana.

Retrieved from "https://cleveland.fandom.com/wiki/Cecilia?oldid=32718"
Community content is available under CC-BY-SA unless otherwise noted.