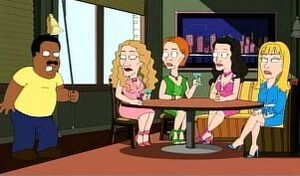 Sex and the City is an American cable television series. The original run of the show was broadcast on HBO from 1998 until 2004, for a total of ninety-four episodes.

Set in New York City, the show focused on four American women, three in their mid-thirties and one in her forties. The quirky series had multiple continuing story lines and tackled socially relevant issues such as sexually transmitted diseases, safe sex, and promiscuity.

Cleveland encounters the four main characters of Sex in the City, Carrie Bradshaw, Samantha Jones, Charlotte York Goldenblatt and Miranda Hobbes in the bar of the Hotel Spitzer in "Once Upon a Tyne in New York". Horrified at their aging appearances, he exposes them to the sunlight to cause them to disintegrate in the manner of vampires.

Retrieved from "https://cleveland.fandom.com/wiki/Cast_of_Sex_in_the_City?oldid=24133"
Community content is available under CC-BY-SA unless otherwise noted.