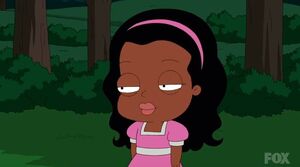 Candice West is the child of Kenny West and Chanel Williams.

When Cleveland Brown Jr. tries to win the heart of Chanel in "Brotherly Love", he provokes Kenny West into defending his life with Chanel by insulting Jr. and forcing a rap-off. When Kenny and Jr. become friends through their rap ability, Kenny admits it was to protect his "baby-momma" and introduces Candice. Jr. hasn't the heart to break up their family, but Rallo is smitten with Candice.

She makes her first speaking appearance in "Harder, Better, Faster, Browner". In the episode, she is revealed to attend Harper Elementary School and lives out of her nineteen-year old dad's car. Later, she is taken in by Cleveland and his family, and ends up reigniting her relationship with Rallo. She has a double date with him, Walt, and his date, but as soon as she and the latter use the ladies' room, Rallo and Walt decide to bail on them and escape to Cheese E. Charlie's and persuade all the other men whose dates are using the restroom to do the same.

Candice is voiced by Aseem Batra.

Retrieved from "https://cleveland.fandom.com/wiki/Candice_West?oldid=31464"
Community content is available under CC-BY-SA unless otherwise noted.