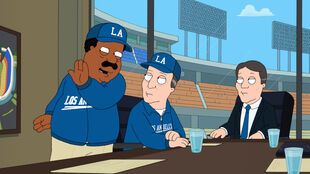 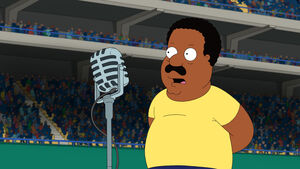 As Donna wakes up Cleveland on the anniversary of his meeting her, he only remembers giving up his dream of going to California to be a baseball scout instead of their wedding. Donna decides to treat him to his dream as part of a family trip to California.

Settling into their new apartment in California, Cleveland heads out to the ballpark while Donna confesses that she believes he'll be back to normal after figuring out it's really work. Cleveland gets kicked off the field during a game, and indeed, finds out that it is real work. In Hollywood, the family gets star-struck as Rallo becomes a paparazzi, Junior becomes infatuated with the "superheroes" posing for pictures in front of the Chinese Theatre, Roberta finds a real Hollywood high school where she will be “the new girl” and Donna manages to entertain a bored kid at the grocery and finds she can make big money as “Old McDonna.”

At home, the family tells of their adventures while Cleveland finds his dream just isn't happening for him. Cleveland meets new neighbor Gina, an aspiring actress and confides that things are not working out the way he expected. Junior spots some shoplifters in front of the "superheroes" posing for pictures and when they are no help, decides to gather them into a group of real superheroes. Cleveland decides to make a splash by recruiting professional players from other teams. The manager threatens to fire Cleveland if Donna wasn't holding pictures of him and gives him dirty jobs. While Donna performs, Cleveland calls to complain about his day but she gives him the brush off. Rallo hangs out with the other paparazzi. Gina takes Cleveland out to a small community just like Stoolbend. Seeing his excitement, Gina suggests he should go back home. 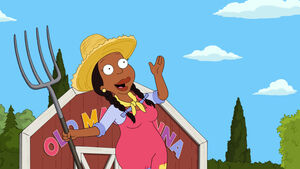 Junior and the guys stop a theft. But while on a rooftop, as they hear gunshots and leap off the building, splats are heard and Junior reconsiders the superhero gig. Cleveland finds that Donna's little job has become a big enterprise with multiple “Donna's.”. He suggests they move back until Donna explodes at the help and she refuses to go back home. When Gina asks Cleveland how things worked out, the rest of the family are showing the effects of being in Los Angeles and she suggests Cleveland do whatever it takes to get them to go back home. They arrive one day to see a message Cleveland sent from Stoolbend, showing their friends and what they are missing. They suddenly find they want to go home just as an earthquake strikes. As the walls split, the family finds they were really fooled by a Hollywood production but they are still resolved to go back home. Cleveland congratulates Gina for putting the production together as Cleveland bids goodbye to the Dodgers.