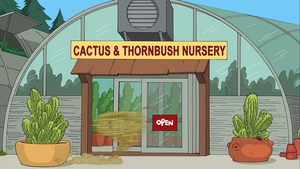 The Cactus & Thornbush Nursery is where Terry Kimple lands after falling off of a house roof when he is pursued by a whirlwind of Cleveland's farts in "Gone with the Wind".

When Cleveland realizes his unrelenting flatulence has filled a house in which he and Terry are installing cable for Waterman Cable, Cleveland tried to dispel the gas by turning on a ceiling fan but it serves only to whip the fumes into a whirlwind which pursues Cleveland and eventually launches itself through the ceiling, knocking Terry off the room into the nearby nursery. The gas tornado then follows him next door was he is heard trying to escape the thorns.