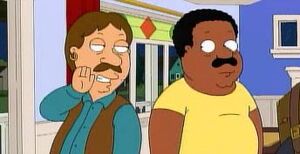 Bruce is a resident of Quahog and a recurring character on Family Guy.

In "Harder, Better, Faster, Browner", he mistakenly appeared on the wrong show. On his way out, he informs Cleveland that he has a truckload of snack packs which Cleveland had tried to get from Rallo earlier in the episode.

In "Die Semi-Hard", he meets what would turn out to be his boyfriend Jeffrey at the airport.

Bruce is voiced by Mike Henry.

Retrieved from "https://cleveland.fandom.com/wiki/Bruce?oldid=33526"
Community content is available under CC-BY-SA unless otherwise noted.