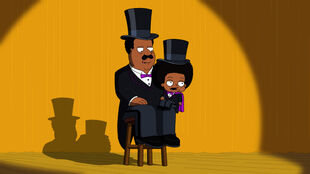 Brown Magic
Rallo makes a dummy out of Cleveland. 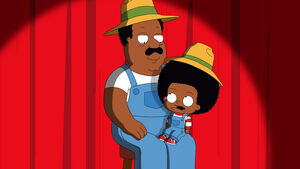 When Rallo sees a magic act on television, he begs Cleveland to take him to a magic show. Excited to spend quality father-stepson bonding time with Rallo, Cleveland takes Rallo to the show, and afterward backstage to meet the star of the show Magical Johnson. They are mistaken for a ventriloquist act and are given the chance where they to be the opening act the following day. Donna has reservations but finally agrees to let them do their act. Cleveland Jr. signs on to be their manager. 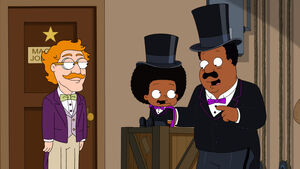 Cleveland starts to bomb but thanks to Rallo's sharp wit in the role of the puppet, Cleveland and Rallo's ventriloquist act becomes a hit. As their act gets rave reviews by fans and ventriloquist critic Graham Kensington, Rallo grows tired of Cleveland taking all the credit for their success. Not one to be taken for a dummy, Rallo claims he faked being interested in Cleveland as a father. When Jr. brings word of a new booking, Rallo balks until Donna intervenes but tells Cleveland backstage that he is leaving him to act on his own. Cleveland tries to fake the act as the crowd gets ugly and finally apologizes to Rallo who accepts the apology and saves the act. But when Rallo takes a bow, their fake is exposed and they are banned from ventriloquism.