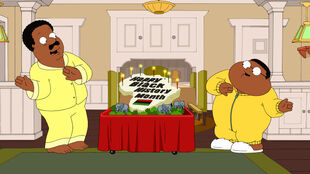 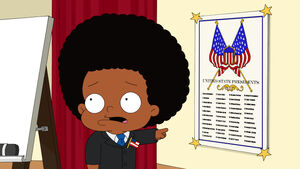 After Cleveland forces an early wake up to celebrate the beginning of Black History Month on the family, Rallo anticipates getting to portray President Obama on the school Unity Parade float but finds it has been given to another student. When he looks to accept a position as the first black President, he is shocked to learn there have been no others and of black people's history as slaves. Rallo targets Lester and his Confederate flag as the symbol of his hate. When Lester questions why there was a need for a 'black' anything, it prompts a fight between him and Cleveland. Lester files charges of a hate crime against Cleveland because of the names called during the fight. 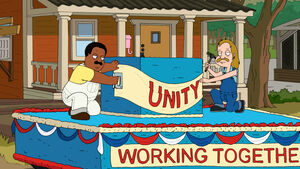 In court, the judge sentences the two of them to work together on a Unity Parade float. While they grit their teeth to work together, Rallo plans to do something about Lester's confederate flag. He takes off from school and sneaks into Lester's house but shock's Kendra into falling on him, being saved only by managing to prop up her grabber tool to give himself some room. Stuck together, they ending up bonding until Kendra's blood sugar starts to dip and she becomes weaker, loosing what little control she had to arch her back and keep from crushing Rallo. At the parade, while Lester and Cleveland start fighting again, Mrs. Lowenstein informs Donna that Rallo never showed up for school. Donna hijacks the parade float and rushes home to try to locate Rallo. Talking of food to distract Kendra, she starts to sweat and they get the idea that if she can sweat enough, Rallo may be able to wiggle free. Rallo succeeds and manages to get Kendra some sugar in time to save her. Lester and Cleveland are happy enough that everyone is safe and agree to a truce, although Cleveland asks Lester to remove his flag. Lester has no idea of it's connection to the Confederacy and only displays it for it's connection to The Dukes of Hazzard.

Retrieved from "https://cleveland.fandom.com/wiki/Brown_History_Month?oldid=32582"
Community content is available under CC-BY-SA unless otherwise noted.