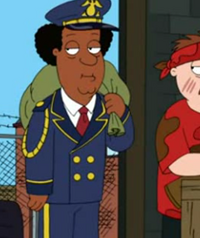 Broderick Brown is Cleveland's brother. He used to work as a plastic surgeon in Quahog before joining the Navy. He was shipped off to Afghanistan and, when he heard about Cleveland's problems with the biggest gang in Stoolbend in "Our Gang", he raided a drug ring and brought a sack full of Afghani heroin, the finest heroin in the world, to trade to the gang for Cleveland and Cleveland Jr.

A picture of Broderick appears on the Brown's living room wall in "The Men in Me".

He also appeared in the Family Guy episode "He's Too Sexy For His Fat".