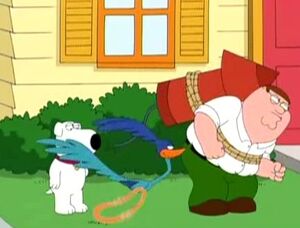 The Griffin's dog and one of Cleveland's former neighbors in Quahog. He appears in the Pilot episode when Peter wrecks Cleveland's bath yet again and at Cleveland's send-off. The entire Griffin Family appear to cut a scene away from Lester using the 'N' word in "Once Upon a Tyne in New York".

In "Ain't Nothin' But Mutton Bustin'", stuffed Brian and Stewie toys are available at the fair.

In "BFFs", Brian and Stewie distract Cleveland off-screen as they are still inside their house, while Peter sneaks to his car, not wanting to speak to Cleveland.

Cleveland and Cleveland Brown Jr. mention what a douchebag Brian is over his atheism in "The Hurricane". Roberta also plays with marionettes of Brian and Stewie Griffin.

One of the dogs Junior and Rallo catch in "Hustle 'N' Bros." resembles Brian although the dog tells them that they are not the same.

Brian is voiced by Family Guy creator and The Cleveland Show co-creator Seth MacFarlane, and he is the only character that Seth provides his natural speaking voice for.

Retrieved from "https://cleveland.fandom.com/wiki/Brian_Griffin?oldid=32503"
Community content is available under CC-BY-SA unless otherwise noted.