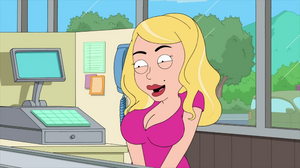 Big-Boob June from the grocery store is a well endowed woman who plays a role in a skit concerning sexual harassment at NASA on Cleveland's cable access show, The Relatively Late Show in "Your Show of Shows".

June was first mentioned as a back-up wife by Cleveland in "Ain't Nothin' But Mutton Bustin'".

She is also mentioned by Rallo in "Yemen Party" while he and Cleveland Jr. are at the Stoolmart.

Donna threatens Cleveland with divorce if she takes off a blindfold to find Big Boob June on a futon in "Grave Danger".

When Cleveland and the guys go to the Ralphed grocery store to replace LeVar Brown's RC Cola in "Of Lice and Men", Big Boob June reveals that Virgina hasn't had RC in years and sends them on a road trip to Kentucky.

Retrieved from "https://cleveland.fandom.com/wiki/Big-Boob_June?oldid=31202"
Community content is available under CC-BY-SA unless otherwise noted.