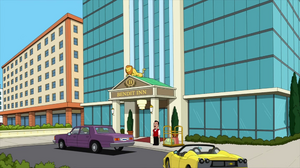 The Bendit Inn is where Cleveland and Donna win a romantic hotel getaway in the Freedom Scout raffle in "Squirt's Honor".

After seeing their original small room overlooking the garbage dumpsters, Donna decides to complain her way into a series of better rooms and Cleveland joins in. But they charge too many "incidentals" such as his and her massages, the mini bar and a 72 hour porn pass that Cleveland only needed for three minutes that were not included in their room, they are forced to work for the resort as maids. Cleveland finds himself accosted in his female maid outfit. Donna believes they can use the incident to pay off their hotel bill but has to use herself as bait to get proof.

With a camera hidden in the cleaning cart, her approach fails to draw interest and Cleveland tries to use himself without luck either. Their pigeon decides to make a run for it but they manage to get a bad recording on the elevator security camera for the manager who fails to fall for the ruse but kicks them out anyways after thinking of them having sex.

Retrieved from "https://cleveland.fandom.com/wiki/Bendit_Inn?oldid=32988"
Community content is available under CC-BY-SA unless otherwise noted.