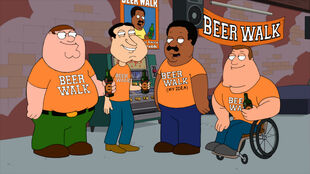 Beer Walk!
After Donna is injured, Cleveland is forced to take over the housework.

Donna, frustrated by her husband’s laziness on the weekends, nags Cleveland to help her around the house and to do something more with his life. Donna brings up her charity work prompting Cleveland to prove to Donna he can be as charitable as her. After coming up with the idea of pledging money to charity for each beer that they drink, Cleveland recruits his buddies from Quahog and Stoolbend to participate in the First Annual Charity Beer Walk. Pleased with himself, Cleveland decides to drunkenly show off, but when Donna gets injured at the event, Cleveland has to take over the housework. Cleveland soon finds himself in over his head taking care of the kids and Donna. After seeing what Donna has turned Cleveland into, the guys decide to pay her a visit where Holt exposes her charade. Donna admits her ploy but threatens the guys if they let the cat out of the bag. After a night of reflection, Tim returns and calls Donna's bluff, reminding her that he is a bear and can maul her. Donna comes clean to Cleveland but the next day finds him still taking care of the house. Depressed because Cleveland seems to not need her, she goes out drinking with the guys until she decides to take her rightful place back. She begs Cleveland to let her take her rightful place back to which he reluctantly agrees. As it turns out, he was aware of her faking and staged the guys exposing her as a fraud. After returning to her chores Donna too, realizes she's been had.

Meanwhile, Rallo decides it's fun to scare his friends after watching scary movies so he decides to take his show on the road, scaring as many of his friends and family as possible. He stops after his mother punches him out of pure instinct when he scared her.