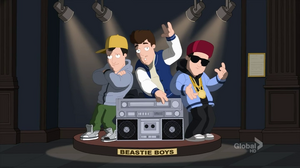 Beastie Boys are an American hip hop band from New York City, formed in 1981. For the majority of its career, the group has consisted of three MCs and musicians Michael "Mike D" Diamond on vocals and drums, Adam "MCA" Yauch on vocals and bass and Adam "Ad-Rock" Horovitz on vocals and guitar.

Figures of the Beastie Boys are used in Rallo and Cleveland Brown Jr.'s Hall of Pretenders to show Federline other white men that took advantage of black culture in order to help him regain his confidence in "Brownsized".

Retrieved from "https://cleveland.fandom.com/wiki/Beastie_Boys?oldid=26498"
Community content is available under CC-BY-SA unless otherwise noted.