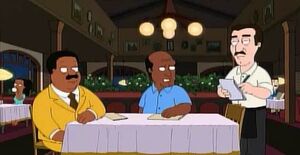 Barry Shadwell is a four-time Superbowl winner for the Pittsburgh Steelers that Cleveland discovers is living back in Stoolbend after a successful NFL career in "Ship'rect". Roberta perks up on hearing Cleveland discuss Barry at home due to his acting connections. When Cleveland finds out that Barry has a white step-son named Larry, he dreams of trying to hook Roberta and Larry up together. Meanwhile, Barry invites Cleveland to be his partner in the Floaterboat Race. Cleveland is forced to tell his friends he will be Barry's partner instead of working on their boat.

As the race gets started, a wind blows Kendra's Cheeze-Its overboard, causing her to dive after it and upsetting the boat crewed by the rest of Cleveland's friends. The same wind capsizes most of the other boat as well. As Cleveland and Barry struggle to hold their boat together, they are forced into a number of compromising positions, culminating in having to pass a rope between their teeth together. They manage to hold their boat together and win the race. Afterward, Barry agrees that things have gotten just too uncomfortable between the two of them and offers to move.

Barry appears as one of the telecast hosts of Super Bowl XLVI in "There Goes El Neighborhood" and in the German segment of "Wide World of Cleveland Show" as a Nazi officer.

Retrieved from "https://cleveland.fandom.com/wiki/Barry_Shadwell?oldid=25591"
Community content is available under CC-BY-SA unless otherwise noted.