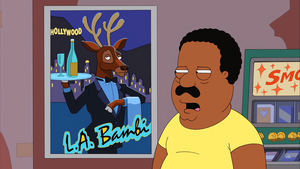 Bambi is a 1942 American animated film directed by David Hand (supervising a team of sequence directors), produced by Walt Disney and based on the book Bambi, A Life in the Woods by Austrian author Felix Salten. The film was released by RKO Radio Pictures on August 13, 1942, and is the fifth film in the Walt Disney Animated Classics series.

The main characters are Bambi, a white-tailed deer, his parents, his friends; a rabbit named Thumper, a skunk named Flower, and his childhood friend and future mate, Faline.

In "There Goes El Neighborhood", Cleveland tells of mistaking the film La Bamba, which is the story of 1950s rock performer Richie Valens for being about Bambi going to Los Angeles. on the way out of The Broken Stool, he passes a movie poster for L.A. Bambi and vows not to be fooled again.