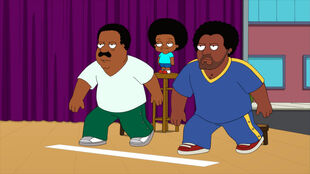 Back To Cool
When Cleveland Jr. bonds with Donna’s ex-husband, Robert Cleveland challenges Robert to a “Coolympics” competition. 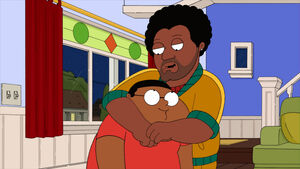 The episode starts out when Cleveland, who is reading the newspaper, gets stopped by Rallo and Roberta's fighting. Thereafter, Robert comes by to get his alimony check from Donna, taken in cash. The kids, fighting ends up with Cleveland getting hit, then as Robert tries to leave, Cleveland stops and reports to him that if he still wants to get more alimony checks, he'll have to take his kids for a day. Robert takes them along, leaving Cleveland to finally enjoy some alone time. As Cleveland gets relaxed, however, Cleveland Jr. comes and annoys him, which culminates in Cleveland fighting with Jr. to get into Robert's car. Next, now that Cleveland and Donna are alone, they go on their computers. 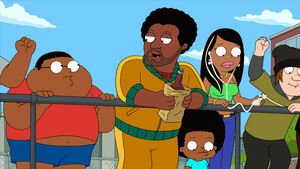 Later with Robert and the kids, he takes them to a dog fight, and gives them tips if the dogs break out. Later at midnight, Cleveland and Donna realize that the kids haven't come home. Robert returns the kids home, and reveals a new bond between himself and Jr.. Later on, the bonding progresses well, and Robert finds out about Jr's new crush on Joanna, and tells him that he is going to give Jr. the sex talk, but Cleveland does after this. When Cleveland and Donna go to the movies, they see Robert and Cleveland Jr. and his date. When Cleveland Jr. comes home after the movies, he explains to Cleveland that Robert is cooler than him. When Cleveland believes there is no way to earn his son's love back, he is informed that he will try to beat Robert in the Coolympics. He fails, but still has the love of his son.

Previous Episode /// Back To Cool \\\ Next Episode