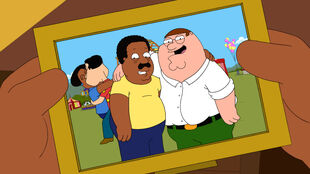 BFFs
In an effort to bond with the guys, Cleveland takes them on a camping trip. 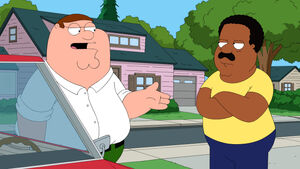 When Cleveland finds out that Peter stopped by Stoolbend but didn't visit with him, he decides to go to Quahog, Rhode Island to see Peter himself. After getting the brush-from Peter, Cleveland decides to bond with the guys. Searching out bonding experiences, the guys decide on a camping trip hosted by Ric Flair. While canoeing to a gathering place, the guys upset their canoes and are tossed overboard. Gathering themselves on the bank, they become lost and are found by a group of hillbillies who plan on raping them. When Cleveland understands what is about to happen, he makes a break for it but the others fail to get away. Cleveland finds himself at the intended gathering spot and after a spa and massage, goes back to rescue his friends. Cleveland is caught as well but before he can be raped, Peter and the Evil Monkey come to their rescue. Peter admits he had second thoughts after Cleveland left and after therapy from dealing with abandonment issues from his father thought it was best to avoid the same feelings with Cleveland. Cleveland reminds Peter that they are and will always be friends. 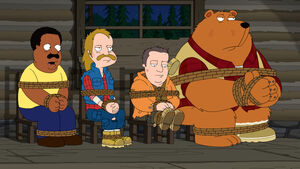 Meanwhile, Rallo gets invited to a reunion of his daycare graduation. While there, Donna feels she hasn't pushed Rallo to advance himself as the other class mothers have and Donna has Rallo compete in a Quiz Bowl tournament to prove that he is just as smart as the other kids in his class. When Rallo bombs at the Quiz Bowl, he demonstrates a through understanding of practical knowledge rather than trivia and he leaves triumphantly with Donna.

Retrieved from "https://cleveland.fandom.com/wiki/BFFs?oldid=32703"
Community content is available under CC-BY-SA unless otherwise noted.