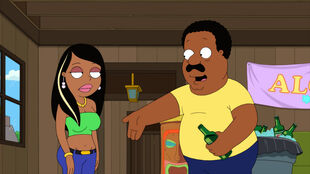 Roberta is not impressed with Cleveland. 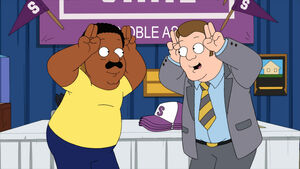 When Cleveland and Donna search a college fair for Roberta. Despite her parent's enthusiasm, Roberta is resistant to going to college, wanting to go to a concert instead but Donna puts her foot down that Roberta will go to college. Thinking back to his college days, Cleveland volunteers to accompany Roberta on a college visit to his old alma mater during homecoming as an excuse to relive his crazy college days and Donna agrees to allow him as long as he gets her to college. As they head out, Cleveland is unaware that Federline is following with the intention of taking Roberta to the concert.

As Cleveland shows Roberta around, Federline catches up and Roberta tries to slip away. Deciding to visit his old fraternity, the frat brothers are unimpressed by Cleveland and decide to make a fool out of him. Taking him away to get drunk, Roberta gets her chance but when her and Federline bump into his parents, they take the two on the campus tour. Cleveland's fraternity chapter gives him a less-than-brotherly welcome by crowning him "dumb alum" after he passes out. After finally getting away, Roberta finds out that his fraternity pranked him and when they get fresh with her, she beats them until they reveal where they left him. As they search for Cleveland, Roberta admits that Federline's parents impressed her and decides to go to her interview despite Federline's continued reluctance. Finding Cleveland, they ride the donkey he was tied to to the interview, making it in time. When Roberta returns, Donna is pleased that her attitude has changed about college but she insists she is going to a more expensive school. 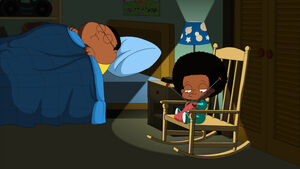 Meanwhile, Rallo helps Cleveland Jr. learn to sleep without his beloved stuffed animal when Larry gets washed by Donna and Junior is unable to sleep with the strange smell and abandons Larry. But Rallo suddenly finds himself being used as a substitute for Larry. When Rallo tries to set Junior straight, Junior simply tells him he outweighs him and Rallo can't get any support from Donna. Rallo removes one of Larry's eyes and passes him off as Larry Jr., which pacifies Junior.