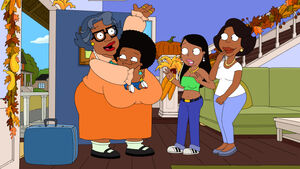 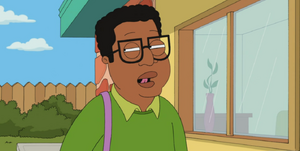 Auntie Momma, also known as "Uncle Kevin", is a relative and parental figure of Donna's. She is obese and her catchphrase involves her farting and then yelling "I'm outrageous!" She is actually Donna's uncle Kevin in disguise, but put on the "Auntie Momma" ruse around Donna's sixth birthday when he realized that she didn't have a strong female role model in her life. She is very popular with Donna's family, being praised by Rallo and Roberta for her wisdom and wacky nature. She is also very promiscuous, having slept with seemingly hundred's of men, including Cleveland's father LeVar Brown. When Cleveland confronts her about her secret, she reminds Cleveland that it would devastate Donna for her to know the truth, and reminds Cleveland that she is glad Donna found the right man for a husband.

Auntie Momma plays the role of one of the hostages taken by Tim and his group of thieves in "Die Semi-Hard".

In "Mama Drama", Auntie Momma offers to help Cleveland find Donna's real mother Dee Dee but when they take a break after striking out, Cleveland decides to hire an actress who later drops over dead and the real Dee Dee arrives who explains about leaving Donna with her uncle Kevin. This confuses Donna as she has only known Auntie Momma until "she" arrives and they figure out the mystery.

She is voiced by Kym Whitley and Kevin Michael Richardson (when speaking as Uncle Kevin).

In "California Dreamin'", Gina puts together an elaborate production of stand-ins including Auntie Momma to convince the Brown family that Cleveland has returned home from Los Angeles and they should do the same.

In order to help Donna and Cleveland out by spitting up some of the kids activities in "Wheel! Of! Family!", Auntie Momma takes Roberta shopping for personal hygiene products. When she asks Auntie what brand she uses, she struggles to come up with an answer before settling on "Brawny", eliciting a laugh from Roberta who also tries to fart likes Auntie does.

Retrieved from "https://cleveland.fandom.com/wiki/Auntie_Momma?oldid=33517"
Community content is available under CC-BY-SA unless otherwise noted.