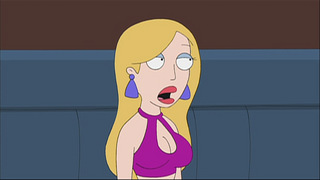 Athena is a Greek prostitute that Cleveland uses to convince Donna's friends he is cheating on her in "Ladies' Night".

An interview released prior to the first season had Marina Sirtis reporting that she was playing a "Greek prostitute"[1]. In a deleted scene at The Wheelhouse, Holt introduces Athena, another prostitute date with whom Arianna is able to converse as she did with Fabrizia. Athena's speaking roles were removed and her only scene is at the end of "Ladies' Night". She also appears with Fabrizia in "You're the Best Man, Cleveland Brown".

Retrieved from "https://cleveland.fandom.com/wiki/Athena?oldid=18365"
Community content is available under CC-BY-SA unless otherwise noted.