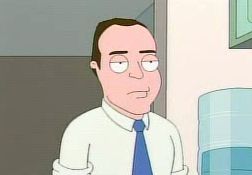 Arch is one of the office workers at Waterman Cable. He seems to be very serious, being quite a stickler when it comes to office etiquette and asking Tim to return the coffee filters and sweeteners he takes from the break room in "Birth of a Salesman". Additionally, while making fun of Cleveland Jr. at the office, he is the only employee not to originally laugh.

He has a son, Keith, who is as equally droll as his father. Arch shares his sense of humor with his son, only allowing him four laughs a week.

Angus, Gordy, Saul Friedman and Arch are the other husbands who cross dressed in order to try to turn the tables on the swindler at the mall in "The Way the Cookie Crumbles".

"Hot Cocoa Bang Bang" shows Arch being familiar with Cleveland in the 80's.

In "Die Semi-Hard", LeVar Brown and Arch portray two FBI agents that mistake Cleveland Brown for a terrorist. Their helicopter is destroyed when Tim orders explosives on the roof to be set off.

Arch reluctantly takes the job as Santa at Grundle's Department Store in "'Tis the Cleveland to be Sorry" but bails out on the job, leaving the kids without their presents. Despite his outward appearance of being straight-laced, Roberta reports that Arch is known for buying the kids beer.

In "California Dreamin'", Gina puts together an elaborate production of stand-ins including Arch to convince the Brown family that Cleveland has returned home from Los Angeles and they should do the same.

Arch is voiced by Mike Henry.

Retrieved from "https://cleveland.fandom.com/wiki/Arch?oldid=32864"
Community content is available under CC-BY-SA unless otherwise noted.