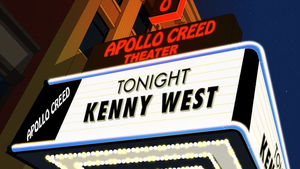 the Apollo Creed Theater is where Kenny West tells Cleveland he is fired as his song writing and rap partner in "Harder, Better, Faster, Browner", citing Cleveland's lack of rap knowledge and fashion sense. Cleveland starts to sing a song of lament, but is rushed out by a janitor.

The theater is named after the fictional boxer Apollo Creed from the Rocky film franchise, as well as being a parody of the Apollo Theater.