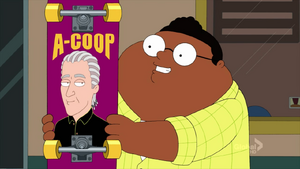 Anderson Hays Cooper (born June 3, 1967) is an American journalist, author, and television personality. He is the primary anchor of the CNN news show Anderson Cooper 360°. He also serves as host of his own eponymous syndicated daytime talk show, Anderson.

The first thing that comes to Cleveland Brown Jr.'s mind when Rallo tries to coach him on how to pick up Chanel Williams in "Brotherly Love" is Anderson Cooper with curly hair.

In "All You Can Eat", Cleveland Jr.'s girlfriend Daisy gives him a skateboard of Anderson Cooper wearing courderalls at the Fluvanna Center.

Retrieved from "https://cleveland.fandom.com/wiki/Anderson_Cooper?oldid=31169"
Community content is available under CC-BY-SA unless otherwise noted.