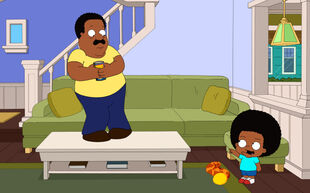 American Prankster
Rallo gets Cleveland Jr. into trouble with his pranks. 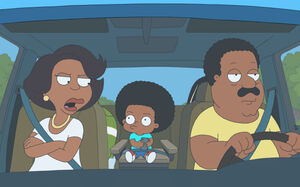 When Donna gives Rallo some cash at the Woolworth's, he picks out a can of fake snakes and pranks Cleveland and the town. Meanwhile, Junior shows off his merit badges and proceeds to earn more. But when Donna gets sick of Rallo's pranks, she punishes him by taking away his desert and giving it to Junior. In revenge, Rallo takes a picture of Junior after forcing him out of the shower. At the scout trip kickoff ceremony, Rallo substitutes his pictures for Junior's presentation. As a result, Junior gets kicked out of the scouts. 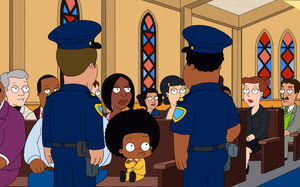 After trying to extract an apology from Rallo and failing, Donna punished Rallo by sending him to his room but the punishment comes up short as Rallo manages to find a number of ways to amuse himself. Cleveland takes matters into his own hands, and sends Rallo to church where he arrested for distributing nude pictures of a minor, namely Junior. In court, Rallo is unable to get a defense for his age and is sentenced to juvenile hall for six months.

While waiting for the bus to take him to juvie, Rallo is forced to watch a “scared straight” video while Cleveland cackles with the others involved about pranking Rallo. However, Rallo gets so scared he escapes, forcing everyone to form a search party. Tired, Junior takes a break. Spotting footprints, he uses his scout tracking skills and discovers Rallo. Upset about being pranked himself, Rallo attempts to fake his own death but falls off a cliff into a river and Junior follows to rescue him. The others spot Rallo floating by as Junior rushes to catch hm. Using his pants as a flotation device, Junior catches Rallo just before he falls over a waterfall. As a result, Junior gets a scout promotion as Cleveland falls for one last prank.