All You Can Eat 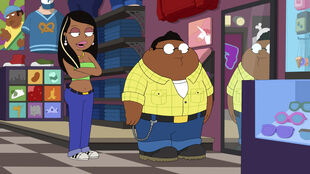 All You Can Eat


Plot: After Junior gets picked on at school by Oliver Wilkerson and others, Roberta convinces him he needs a makeover and takes him out of town to give him one. His stylish new look gives him the confidence to approach Daisy, a misfit who catches his attention at the arcade. But when they get picked on together, Junior steps up and defends Daisy, confirming his offer to take her to her prom. Daisy is amazed at Junior's offer and under the mistaken impression that Jr. is a girl, believes they will be a lesbian couple at the dance.

Roberta is momentarily surprised at the result of her makeover but admits she can see it but tells Jr. to see Daisy as just a person. On their date, Jr. starts tells her the truth but Daisy interprets his actions as remaining in the closet. Jr. brings Daisy home to pretend to come out of the closet and his family pretends to totally screw him over except for Rallo who redirects the feelings to love. But on their date night, Daisy refuses to go after her school threatens to cancel the prom to prevent a lesbian couple from dancing. Junior tries to put some spirit into Daisy but she just gives up, leaving Junior determined to continue the fight.

Junior enlists Roberta to pretend to be his lesbian date, passing on Ernie as she feels responsible for getting him into the mess. As they arrive, the principal threatens to shut down the dance. Junior comes clean about being a guy with his own sister. Daisy arrives and admires Junior for standing up but wants to leave. Roberta talks her into a dance together and she also invites Junior to join them. Junior asks that the next time Roberta gives him a makeover he wants no doubt that he likes the ladies. Three weeks later he arrives home dressed as a gay biker questioning why he listens to her. 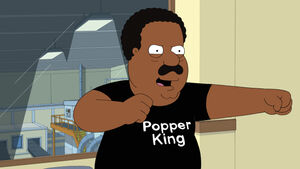 Meanwhile, after showing off his mastership of Slop Poppers, Cleveland’s authority as his favorite snack food’s ultimate expert is threatened by another fan who challenges his edits on a wiki page and evolves into a flame war that quickly gets out of control. Rallo sets up a “popper-off” for the title of true popper king. At the challenge, the rival turns out to be just a kid but a real handful for Cleveland. As things get messy, the company founder arrives to tell them both off and disgusted with their behavior, shuts down the entire factory, leaving them with just their petty one-upmanship.

Previous Episode /// All You Can Eat \\\ Next Episode