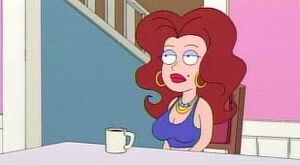 Alexandra Estella DeAnna "Alex" Meneses (born February 12, 1965) is an American television and film actress and model. Meneses portrayed Teresa Morales in Dr. Quinn, Medicine Woman, and has had significant recurring roles on Everybody Loves Raymond as Robert's Italian lover Stefania. She has also appeared in Martial Law and the films Amanda and the Alien, Selena, The Flintstones in Viva Rock Vegas, Auto Focus and Funny Money. Alex has also appeared in numerous L.A. stage productions.

She is credited as the voice of Fabrizia in "Ladies' Night" and Svetlana in "Dancing with the Stools".

Retrieved from "https://cleveland.fandom.com/wiki/Alex_Meneses?oldid=20091"
Community content is available under CC-BY-SA unless otherwise noted.