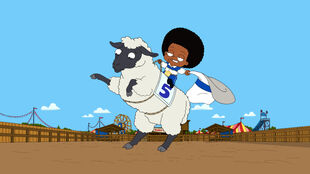 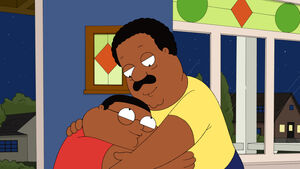 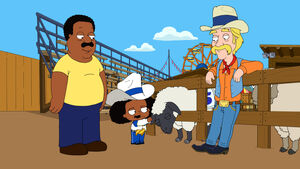 Plot: When Cleveland spends "Take Your Kid to Work Day" with Cleveland Jr., Rallo feels left out. At Donna's suggestion, Cleveland and Rallo start spending more time together. After a disappointing day of shopping and bowling they end up at the county fair. Seeing some sheep they believe to be part of a petting zoo, they find out about "mutton bustin'" or sheep riding. Rallo turns out to be a natural and becomes hooked. Donna believes it is too dangerous and tells them that there will be no more mutton bustin'. Rallo and Cleveland decide to start sneaking off together to continue riding and Cleveland Jr. becomes jealous of Rallo and Cleveland's new relationship. Determined to find out their secret, Cleveland Jr. ransacks Rallo's room until he finds his trophy case and pieces together the truth. Jr. plots to replace Rallo's sheep with himself in order to ruin him but passes out in a portable toilet while changing into a sheep costume. Meanwhile, Rallo finds out that the sheep are destined to become food after their riding days are over. Determined to save his favorite sheep Barnaby, they escape and hop a passing train to town, where they find themselves in a dangerous area. Cleveland is forced to tell Donna about losing Rallo and quickly finds that Cleveland Jr. is also missing. Cleveland Jr. awakes to find his toilet has been transferred to a Renaissance Faire and believes his has traveled in time. Ducking back into the toilet, it is transferred again to a music festival and Jr. believes he is in the 1960s. Rallo passes by and finds him. With Barnaby finding a home with the music festival, Rallo and Cleveland Jr. return home together.