A Vas Deferens Between Men & Women 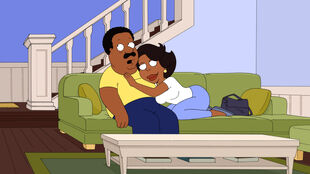 A Vas Deferens Between Men & Women
Donna reveals that she wants another baby and Cleveland must keep his vasectomy a secret from her. 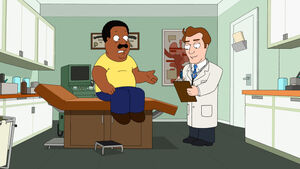 When Rallo finally quits wetting the bed, the family celebrates. But Donna starts to miss having a little one around the house and asks Cleveland to have another baby. Cleveland rejects her but when he gets into the spirit he finds out he doesn't have a choice after the guys remind him he had a vasectomy while drunk. But when he tries to tell her the truth, he has to fake it.

Going to Doctor Fist for a reversal, he finds that the cure may be worse than telling the truth. Going home, he finds Donna claiming she's pregnant. When Cleveland tries to figure it out, he doesn't want to reveal the truth while suspicious of the pregnancy. Donna reveals to Kendra that she really found out the truth and is playing a prank on Cleveland for not telling her the truth but he overhears and decided to try to out-do Donna although she overhears this was well. They continue to one-up each other for twenty three weeks while they wait for the other to reveal the truth. 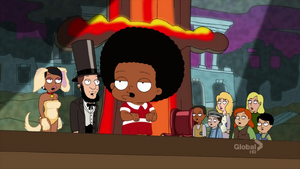 Meanwhile, Roberta gets rejected for the lead in the community theater musical production of Annie and Rallo is accepted as the lead. To everyone's dismay, Rallo turns into a demanding diva backed up by the director. But when Principal Farquare reveals that his demands have bankrupted the production, the show is canceled. As Rallo cries over the show being canceled, the kids decide to put on their own “knock-off” version of the show so they can avoid paying the license fee.

When Donna's "water" breaks during the production of Anny, they go to the hospital and during the “delivery” the truth comes out. They both admit the experience has proven that they are both too tired to really have a child.

Previous Episode /// A Vas Deferens Between Men & Women \\\ Next Episode