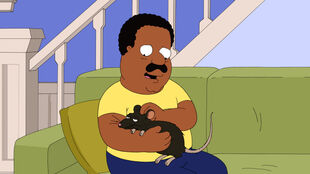 A Rodent Like This
Cleveland deals with a problem rat. 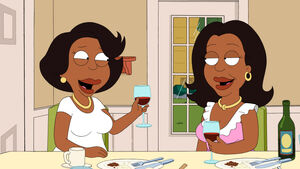 While Dee Dee visits, Cleveland is forced to wait on her and Donna. When she finds the Brown's house has a rat infestation after she and Donna go to the basement to build a Lego figure of Martin Scorsese, she invites everyone to stay with her. When Cleveland is left behind to deal with the rat, he almost kills it until he realizes just how much quieter his life will be without the family for a while and decides to keep it alive for a few days. When he returns from another annoying dinner date with the family, the rat sits in the window waiting for his return and, surprised at this show of loyalty, Cleveland starts treating the rat as a pet.

When Dee Dee tells Donna that she has to leave so she go on another singing tour, Donna reluctantly packs up the kids and heads back where she finds Cleveland playing with the rat in the bedroom although Donna interprets it as cheating at first. When the truth is revealed, Donna is still distressed as the rat latches itself onto her and bites her. Cleveland calls 911 at her instructions but turns her in for assault of the rat and having pot. Taking Donna to the hospital to test her and the rat for rabies, Cleveland is distressed to find they plan on killing the rat as part of the test and tries to stop it despite Donna's insistence. Cleveland tries to buy the rat one last chance until slapped by Donna and begs to take the rat in the woods to kill it himself. In the woods with Donna and the rat, he wants to take one last look and finds out the rat really has rabies and is attacked. Jumping into the car to flee the rat with Donna, Cleveland finds he left his keys outside with the rat. They play "paper-rock-sissors" to get see who has to get the keys and Cleveland returns as the car comes under attack from the rat. As they flee, Dee Dee kills the rat, declaring that she no longer has to go on the road since she has a completely whipped son-in-law as Donna develops rabies and Cleveland insists they need another take from the Lego figure of Martin Scorsese. 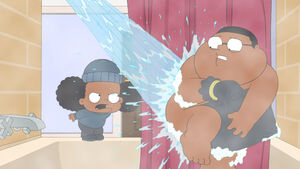 Meanwhile, after Rallo becomes hooked on spies after watching a James Bond marathon, he starts pretending to be a spy until his game is broken up for torturing Larry the Leopard. When Junior won't reveal what's in his secret briefcase, Rallo believes he is playing the game as well and becomes determined to find out the secret. When he spots Roberta talking to Junior he believes she is in on the game and tries to get her to spill the secret. She tries to get him to drop his plan to find out but Rallo remains as determined as ever. Frustrated, Rallo searches Junior's personal belongings while he is in the shower. When he can't find it, he realizes that Junior is wearing it in the shower and surprises him, wrestling with him until they fall down the stairs and the briefcase comes unlocked from Junior's wrist. Finally getting to see what the big secret is, Rallo finds a coupon for corned beef sandwiches at the Stubby Pickle Deli. When Junior demands the coupon back after Rallo learns the secret, Rallo decides to keep the coupon despite not knowing what corned beef is. At the deli, Rallo finds out that Junior really is a spy and Cleveland is a dupe while skinny Junior was killed. Junior reveals that Stoolbend is a hotspot for enemy agents due to its proximity to Washington D.C. and its good schools and his next target is to kill Tim, a deadly terrorist. Junior recruits Rallo to do the job by injecting him with an explosive to be set off with a cell phone signal as Rallo screams. Rallo awakes believing it was a dream but Junior passes by, telling him it was real as he uses a cell phone to set off an explosion. The episode ends with a reassurance that Rallo will return and a series of bowel movement/spy jokes.